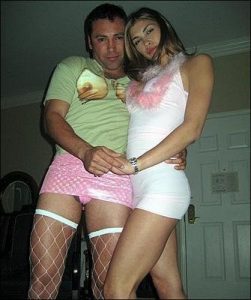 Security officers made a citizen arrest on Milana aged 22 at the time as she tried to exit the department store carrying a shopping bag filled with more than £1,000 worth of stolen designer sportswear, sources said.

Security Team Catch the Fishy Shoplifter in the act

Several staff members witnessed the Siberian stripper stuffing bag full with garments from the shop’s shelves at 7:45 p.m. and security guards confronted her as she tried to make a dash for the exit, according to police sources.

The shop’s security team held Dravnel at the store until the police arrived, arresting her on for the theft and she was held in custody overnight night.
“Oh, it’s like a five-star hotel. They promised me caviar and a limo but they lied to me,” Dravnel said when a reporter asked her about the incident.

“The charges are nonsense and the next few court appearances are going to show there’s no evidence against Milana to even have her arrested,” said Ms Dravnel’s defence lawyer.

Milana Dravnel made a name for her self after leaking photos of De La Hoya and accusing him of tarnishing her reputation by publicly denying he’d posed for photos while dressed in drag back in 2003.